The evolution of my AV system.....

Forgot to mention....some prefer copper cables with these KEF speakers, so best to compare each before you buy....

I did compare, as I had some Chord Carnival silverscreen too, and preferred the Odyssey 2.
P

I added my old Pioneer A-605R stereo amp to the system, firstly using it as a seperate system with the cd player, and then through the pre outs on the denon to run the front speakers at all time.

I have to say the Marantz PM6004 does work very well with these speakers......so much better than the old Pioneer....... Picture update.....KEF Q500's are gone and replaced by a pair of KEF Q100's that are wall mounted. Surprisingly they sound quite good up there too...

It all gives a bit more space in the lounge for our 8 month old daughter to play in!

And the tv got bigger...50" Panny Plasma!!! And the last change was the blu ray player...it didn't improve the picture much, but there was a sound improvement from the Sony S370, which is now in my office.
R

Smart. Did u have the sub with yr 500's? How do the two systems compare?
P

I find the Q100 system better for tv/movies....it seems clearer. In hindsight I think the Q500's were a bit too much for the size of room, sound/bass wise, which is why I'm actually preferring the Q100 system.

In terms of music through the two Marantz units, the Q100's are pretty impressive for their size. They have a surprisingly deep bass too, although not to the scale the Q500's had.

Initially I stored the Q500's thinking I would use them again when our daughter was a little older or if we moved to a bigger house. I've now sold them (got £400 for them), as I found the Q100's so impressive. Bought the Q100's for £225 too (mint condition/second hand), so they are 'the real deal' as David Dickinson would say!

By the way...I will be hiding the white cables up to the speakers at some point. Either in the partition wall or using painted cable tubes.
M

Things have changed a lot since my last post on here. The main one is an addition of a projector and 77" electric screen into the system! 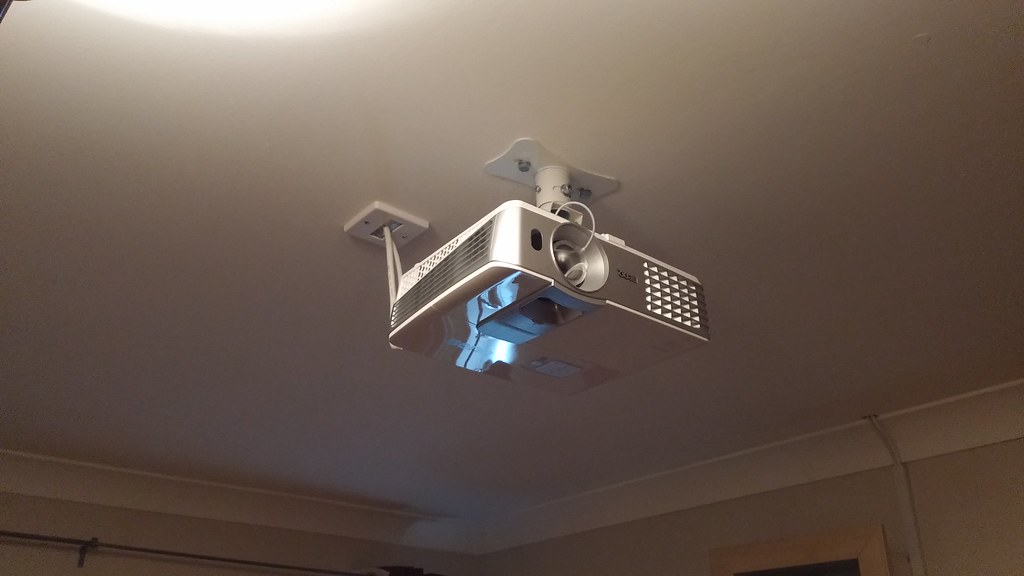 The location of the Ben Q W1070 wasn't idea as it wasn't at the ack of the room, but I had no choice due to the size of screen I had and the location of the joists. ( I wanted to feed the cables from the side of the room in picture and have the Projector attacked to a joist for piece of mind. 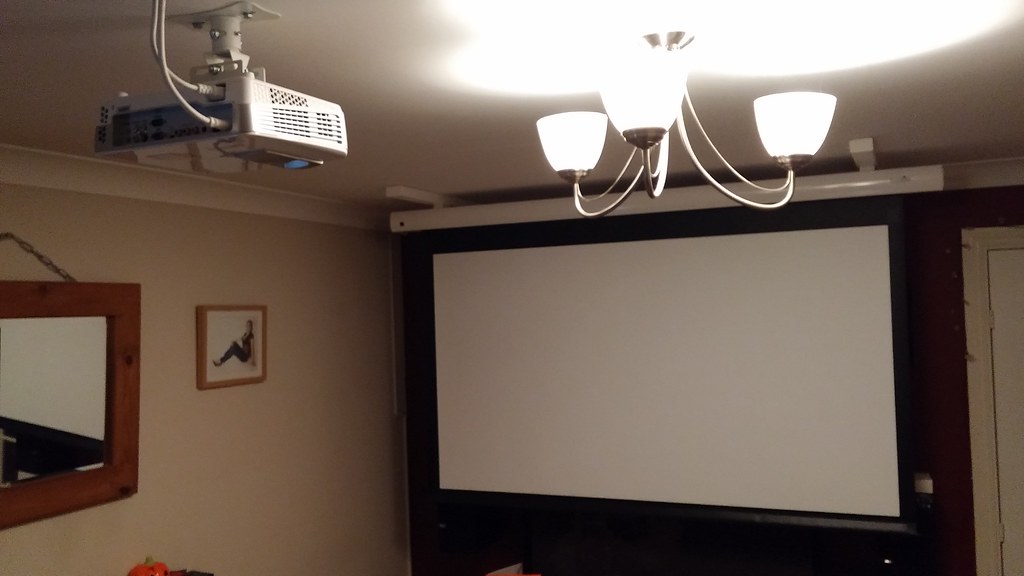 Eventually when I replace the upstairs carpet, I will install spot lights, but this works as it is. 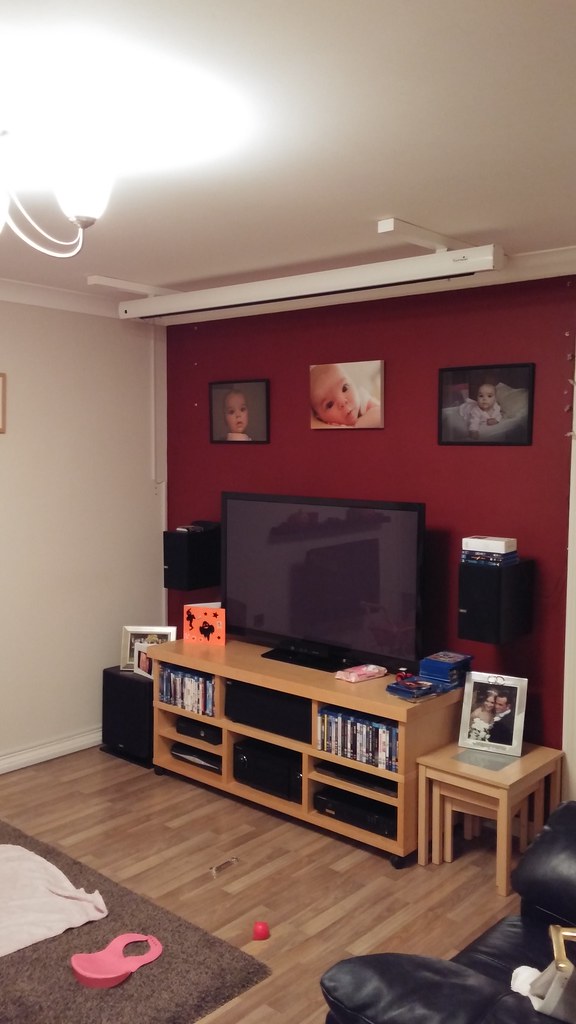 Again I wanted to make sure the screen doesn't fall, so I attached two blocks of wood between two joists, and painted them. I then fixed the screen to the blocks. I know it could be done above the ceiling, but again I don't want to take the old carpert up just yet.

Apologies for spelling mistakes above...tried to change them but I'm supposedly spam!!!

Here are the screen pictures...first one is a dvd, and the other two are blu ray: 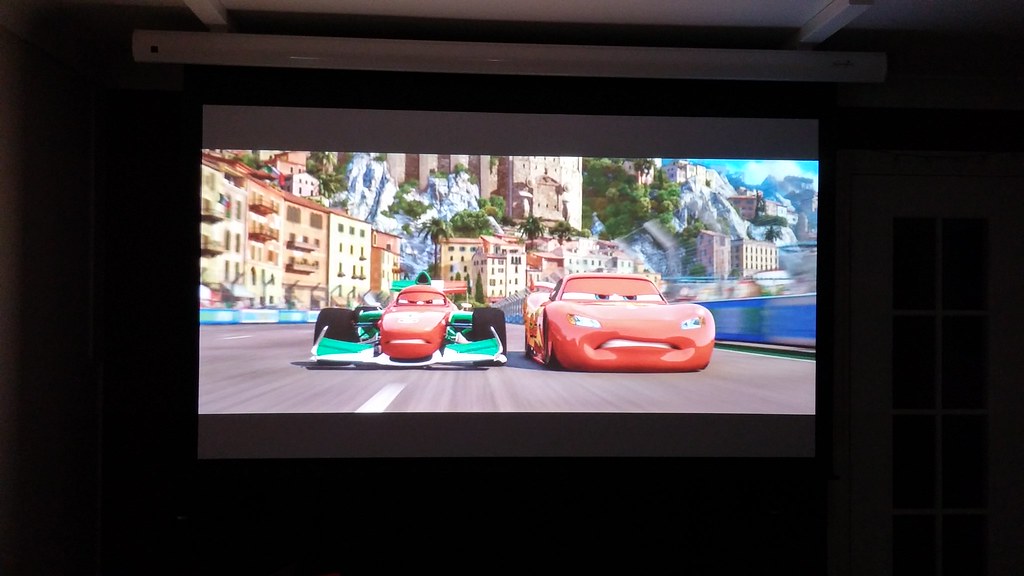 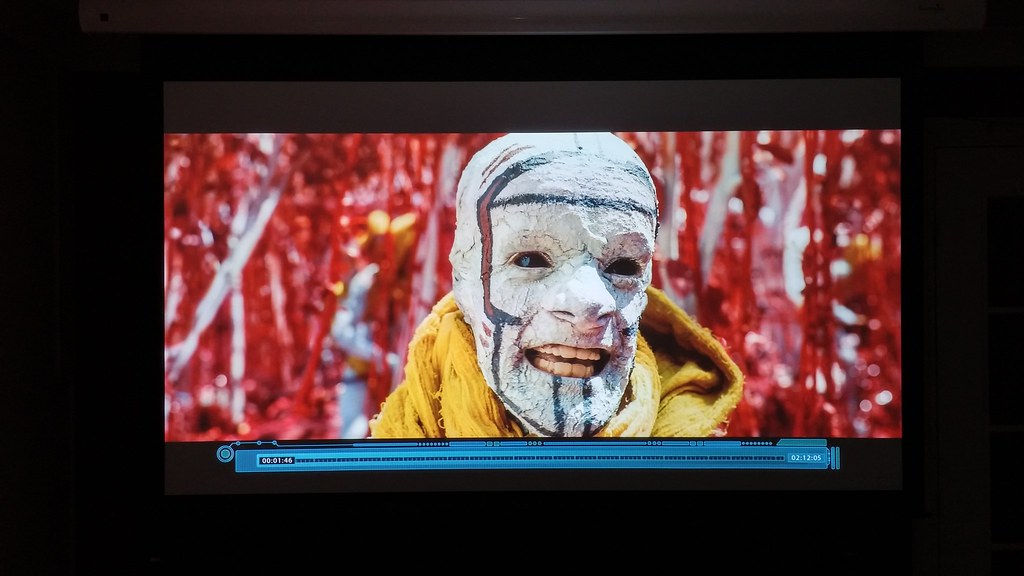 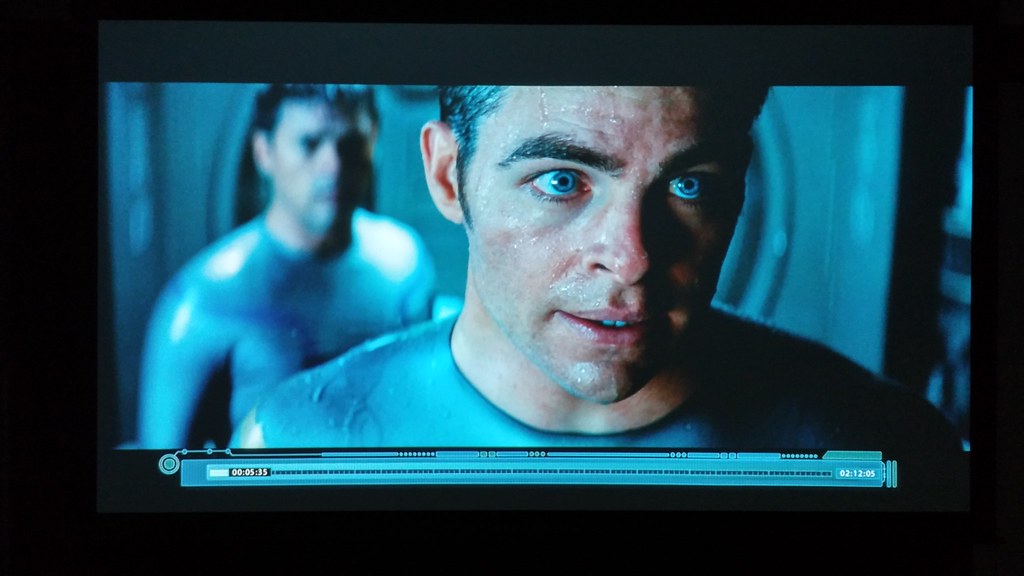 Red and beige walls were changed to a black and white scheme very soon after the ex wife left the building! 🤣🤣🤣

Anyway, I got a mint pair of Q500's recently off ebay for a very good price... And its great to have them back!

My daughter is now 7 years old, and only here 50% of the time. But she knows to keep away from them, so not to knock them over 👍👍🤞🤞
Reactions: gel
P

Oh yea, and I missed the AV Receiver upgrade in August 2014 on here 😁😂

The Pioneer sound opened up the detail in music and movies compared to the Denon. Even sounds pretty good with 2 channel music. The old AE Radiance sub is still here too, but relocated next to the couch.

If it is all still working at the end of this crazy year, maybe it'll be my last upgrade for a whole! 🙄🙄
Reactions: gel

Pistolpete1 said:
Oh yea, and I missed the AV Receiver upgrade in August 2014 on here 😁😂

The Pioneer sound opened up the detail in music and movies compared to the Denon. Even sounds pretty good with 2 channel music. The old AE Radiance sub is still here too, but relocated next to the couch.

If it is all still working at the end of this crazy year, maybe it'll be my last upgrade for a whole! 🙄🙄
Click to expand...