My budget streamer for Roon

Dropping Windows recently has been liberating. I decide on a small project. A Roon server streamer build.

As I want it to be silent it needs to use an efficient CPU. I also didn't want to spend much. Particularly as it will be build for purpose. In fact the idea is that money I recoup from my desktop should pay for both the streamer and Roon lifetime membership (or bulk of it)

I will be operating it headless once setup (no screen) and will have an ability to rip CDs as well. Intended total cost should be within what Innuos Zen Mini cost if all goes to plan.

Fingers crossed all parts arrive today. Seems the case I ordered over the weekend from Germany might be here before SSD I got from the UK at the same time.
N

Any specs that you have already settled on like cpu, ram and graphics card. Understand you are going headless. Are you considering a linear power supply in the mix.

Secondly, your choice of cpu will be interesting considering you don't want a fan.

What I have - it's my old gaming build, GPU removed. Repurposed for audio. i5, 16GB RAM, quick SSD, decent motherboard and a very good power supply. However in a mATX form factor and not completely silent although very, very quiet.

Form factor - these are the things I'm improving. Moving from mATX to mini-ITX.

Cost - several elements here. No actual benefit to replace something I have with lesser quality just so it's smaller and silent. Most things mini-ITX are expensive. Next is a rather self explanatory but also no point in making a build to replicate an existing product unless it's either better, cheaper or both

Performance - as is a single use machine which will be running Linux based system I expect it not too be too demanding from resources. There are reports of people running Roon on their NAS which quite a few are really low powered. My only expectation is it be able to do convolution based DSP on max DSD64 files. Which is the most demanding due to resampling DSD to PCM.

Noise - that's where the above reasons make even more sense. Particularly why not go with a NUC. The basic models as far as I could tell aren't fanless. Not to mention not as tidy and with no optical drive. With not fans the need for efficient CPU is even greater particularly in a small case.

I'm a tinkerer so expect this to be an early version to assess potential. I don't have any doubts I'll look to either tweak it or start over.

As to specs I've gone with a 15W TDP APU. It's a quad core A4-5000. 4GB of DDR3 I had spare. It will have a boot SSD drive for now 120GB, plus external storage. DVD-RW for ripping and all will be powered from a 60W external switching power supply (nothing fancy for now).

How it will all work is anyone's guess. I can always return things if they don't workout.

And I just got the text that the case will be here I the next couple of hours. If everything else arrives I can have the hardware part done by midday.
I

An interesting project. I’m looking forward to seeing your review on how it performs.

I don't expect miracles to be honest as cost was the more determining factor. However if it doesn't run smoothly I'll have to reconsider hardware.

It's the software setup I'm more unsure about. Idea is to install Roon server over Vortexbox using its auto CD ripping facilities.

By the way got the bits only waiting for a case which should be here in about an hour.
E

an idea is to remove the DVD Rom or connect it and power it only when your ripping cds which is hardly ever.

what case did you buy?

I thought long and hard whether to go with or without the drive.

This is a budget build more to test the ground than anything else. I usually settle on third iteration with most project.
M

Love the look of the case. You need to make this sticker for the front : 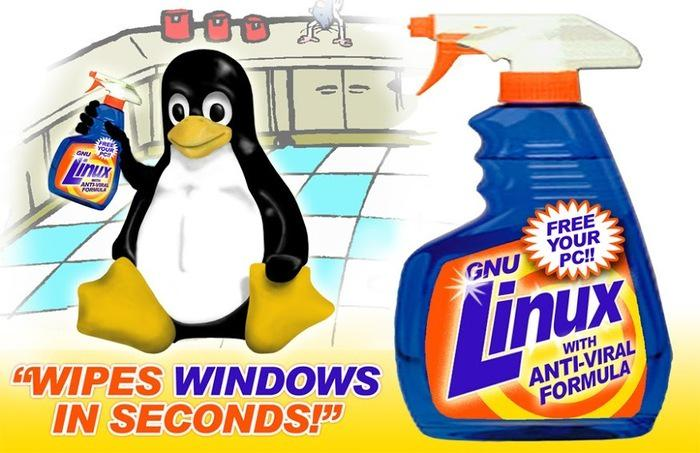 install the Rom rip your cds then try with and without see if there is anything in it.
I have my ripper Rom drive separate and run a long sata cable and have a dedicated output from my big linear supply for it. pain in the bum but I wait until I have 5 or more cds to rip at once
C

if your concept works, have a look at the new coffee lake onboard cpu mobo's - this one in particular - http://www.mini-box.com/picoPSU-80 for total silence Have fun.

So the build is done, it's untidy but I blame it on the case. I'm installing Vortexbox now. It's completely silent which is amazing.

cheeseboy said:
if your concept works, have a look at the new coffee lake onboard cpu mobo's - this one in particular - http://www.mini-box.com/picoPSU-80 for total silence   Have fun.
Click to expand...

Nice, I didn't want to go neither this expensive nor this modern as wanted to use DDR3 I have surplus off. It would've given me twice single core performance and half extra on multicore. I'm hoping what I have is enough.

Vortexbox is up! Now to set it up and get rid of all the functionality I don't need then add Roon server. Once that's done I'll be happy to put a lid on the case

Had lots of update but all downloaded and setup. Installed Roon and setup. Not sure about all the settings for Vortexbox in regards to ripping but Roon works already.

Soon be time to pop the lid back on and take some pics.

Happy to report that I'm playing DSD64 with convolution while Roon compiles the database. No lag however processing is at 2.2x only. Oh well, it works and that's key.

I would have been unboxing the case by now

Hahaha, you give yourself too little credit. I've had to look at instructions for Vortexbox install as never done it but it went OK.

Just tested ripping and although not the quickest it was quiet and ripped a CD automatically to both FLAC and mp3, Roon tagged it in real time and then it ejected the CD. That last bit was important as the case doesn't have an eject button and don't want to use keyboard.
N

insider9 said:
Hahaha, you give yourself too little credit. I've had to look at instructions for Vortexbox install as never done it but it went OK.

Just tested ripping and although not the quickest it was quiet and ripped a CD automatically to both FLAC and mp3, Roon tagged it in real time and then it ejected the CD. That last bit was important as the case doesn't have an eject button and don't want to use keyboard.
Click to expand...

Be close to testing it now for playback. But still you got it all up and running in less than a day. Very impressive indeed

Would be waiting for your listening impressions. Especially how you find the difference between straight flac and upscaled dsd. Then same with roon convulated filters. Enough to play around for a good few days I guess
A

Impressive
Can you provide the cost of the components and where you brought it from.
I was going to build a silent metal case pc with cooling fans a few months ago but I got sidetracked.
A

insider9 said:
Hahaha, you give yourself too little credit. I've had to look at instructions for Vortexbox install as never done it but it went OK.

Just tested ripping and although not the quickest it was quiet and ripped a CD automatically to both FLAC and mp3, Roon tagged it in real time and then it ejected the CD. That last bit was important as the case doesn't have an eject button and don't want to use keyboard.
Click to expand...

I agree that you also don't give yourself enough credit.

You also have a very good snake oil bs detection instinct as well.

Newlash, I'm not upsampling to DSD rather resampling DSD for the purpose of DSP and playback. Rost doesn't accept DSD and I'm using built in DAC so outputting 96kHz.

Andrew, that's the best part. It was meant to be cheaper than anything else out there. While being silent where most things, particularly cheap aren't.

Case: Ms-Tech MC-80 new from eBay (comes with 60W psu) £53
Have I gone with black case it would've come with 90W psu at similar cost. It's a German seller on eBay. These cases usually cost circa £100.

Motherboard AsRock QC-5000M-ITX. New from Amazon. £53 It has a built in APU and passive cooler.

Slimline DVD £16 (used from eBay plus Slimline SATA converter) could've used a new drive from Scan circa £30. Glad I didn't as used old Macbook Pro drive and this thing makes little noise. However is a little slow.

Had I bought RAM and new DVD drive it would cost £200.

How it all started 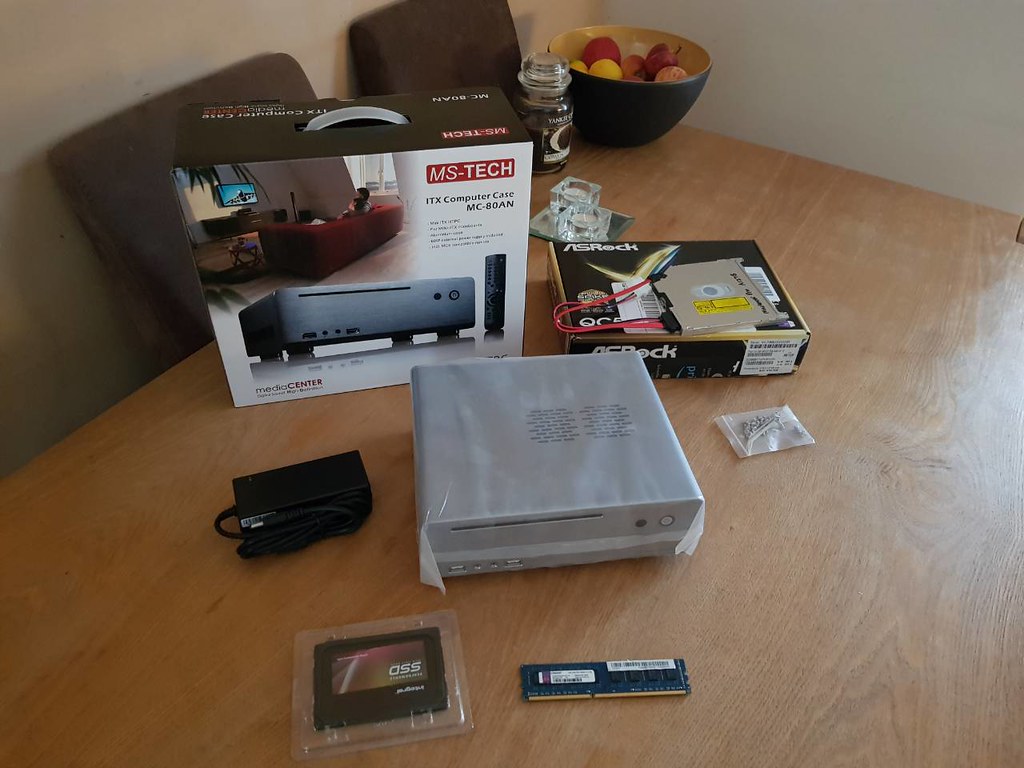 Put together and being installed 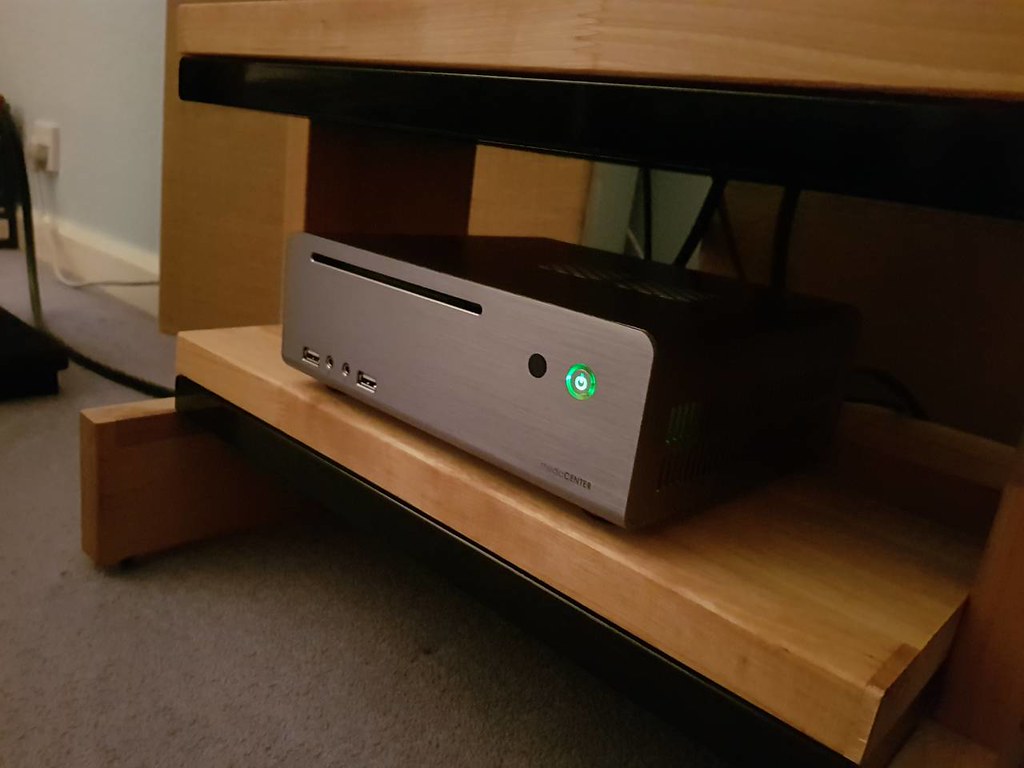 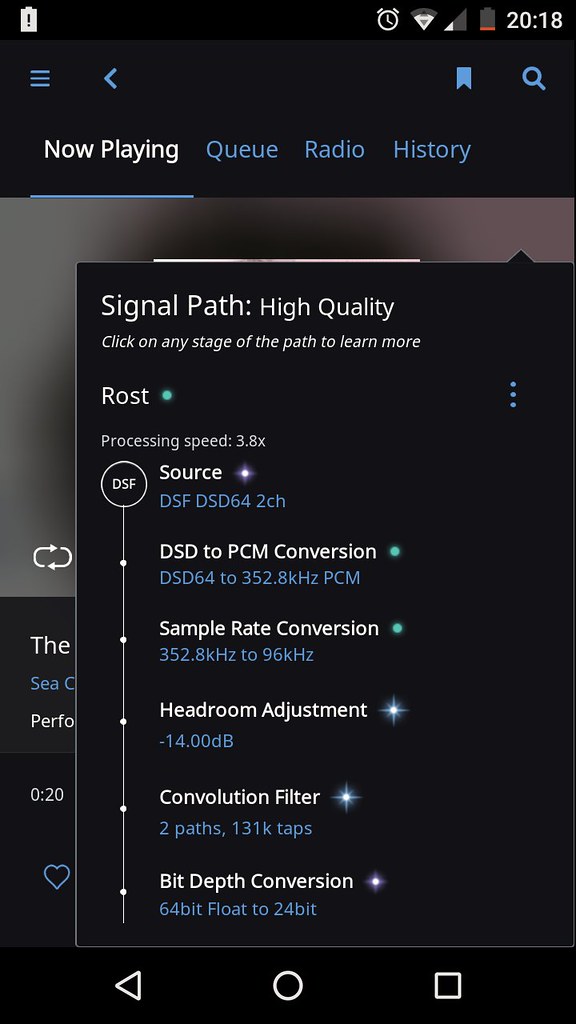