Having enjoyed my present set up for over a decade without any issues, my AKG K702 headphones have broken. The elastic adjustment, which has been repaired before, has given up and I get cracking noises plugging it in and out the amp. I use AKG K271 Mkii for listening when others are at home, and the open backed headphones for when home alone. My Grado SR80s are a good stand in, but the thick cable is annoying where I sit, so I am thinking of something around ear like the K702, that stays comfortable for hours of listening. I also want fabric earpads and preferably one cable, or if there are two, thinner than the Grado wires.

I have a decent budget of up to £400, but would I get a definite upgrade from the K702 or SR80s (around £110) or the AKG K271 (around £80) for that budget? The Musical Fidelity XcanV8P is capable of driving anything and was designed more in mind of £500 plus headphones, according to Antony Michaelson, owner of MF.

Shure SRH1840 are available within your budget. I would certainly suggest you should give them a try. I have the closed equivalent, the SRH1540.
Reactions: Tinman1952 and idc

Beyond that get a Sundara.
Reactions: Friesiansam and idc

There is far more information and reviews than a decade ago, the last time I bought headphones. I have decided to save my pennies and go for the Beyerdynamic DT990, as opposed to the DT1990, as so many reviews suggest the cheaper headphone performs almost as well as the more expensive and in some cases, better.

I also looked at various graphs and the DT990 produce more bass and a bit more treble than the K702, the "V" that some reviews mention for Beyerdynamic headphones, and I think it would be good to try a different sound.

I generally recommend against 2 headphones. The DT990 is one of them ( ATH M50X is the other ). It's sharp, sibilant and fatiguing. I find it painful on some tracks. The only redeeming factor is the soundstage which makes it a pretty good gaming headphone. Not sure what reviews you've seen but the 1990 Pro is on another level. It's still sharp to some degree but it's a very good headphone with none of the 990's problems.

The K701/702 have no bass. The 712 fixes that and has a cleaner overall driver with better extension on both ends while keeping the amazing soundstage.

I'd still recommend the Sundara over almost anything else at $350 US. I've owned about 15 headphones now and it's the best value I've ever encountered. It performs as well as stuff that costs twice as much. The DT1990 Pro included.

I am taking a risk with the DT990 Pro, but the reviews and frequency response graphs I have seen mean I think it worth a go at just over £100 delivered. It is great having the graphs to peruse. I can see if a headphone is going to be more bassy than the headphones I have. The extra bass of the DT990 will hopefully help to make them not as shrill as certain reviews suggest. With my amp and the K702s, I am used to a distinctive treble and no thumping bassline.

Interesting what you say about the K701/2 and the K712, since the frequency graph I have seen has the K701 and K712 as identical throughout the bass range, with the K702 slightly more bass. I knew my K702s lacked bass extension, but they had the detail I like, which is something that the X-Can V8P majors on. This is the first time in years I have looked at anything hifi and just out of interest, I looked for reviews of the X -Can amp and the first one I read, was from someone very happy with it and the DT990s. If it turns out the DT990s are not one for extended listening, it does not matter, since I switch between headphones anyway.

Not being able to audition anything, I would rather risk £116 than £300. The only high end headphones I have listened to were Hifiman HE-6, which I got a loan of. I remember thinking they were good, especially the treble, but not so good that I could imagine spending that amount of money. 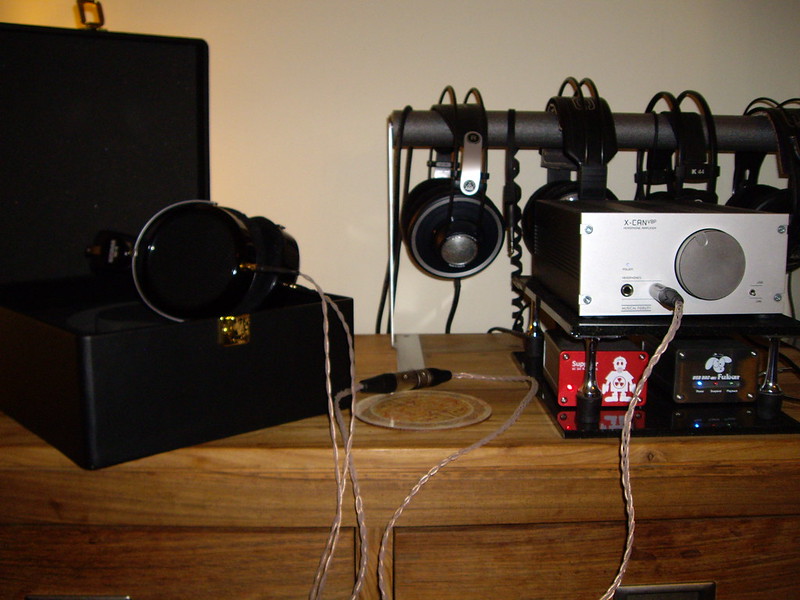 The Sundara certainly gets good reviews, but so much so, is it flavour of the year? The DT990s gets some reviews where it is criticised, but the reviewer then states he is happy with them and they are keepers. After years of listening to a succession of AKGs, I wanted something that is really quite different. It may not be better, so long as it is different.

idc said:
The Sundara certainly gets good reviews, but so much so, is it flavour of the year?
Click to expand...

Yes because it's the best value in the headphone market. It's not perfect but you have to spend twice as much to equal it.

It's your money. The 990s are painful to me and harsh. I can't listen to them for periods longer than about 30 minutes. They're also not resolving enough to scale. They won't sound better plugged into a headphone amp/DAC than they will plugged into a laptop or phone. Maybe paired with a very dark tube amp they'd be palatable. Again other than for gaming I'd recommend against them. To me they fall into the same category as the M50X and are a great many people's first headphone so those people think that's what a headphone is supposed to sound like and write good reviews. Hopefully you enjoy them.
Reactions: nopiano
G

That's understandable.
Why not split the difference, reduce the risk and go for the 712Pro, currently £191 (I'm tempted myself and anort here is doing nothing to put me off )
I wouldn't take too much notice of those graphs, yes they're a guide but they never tell the whole story.

Gray said:
That's understandable.
Why not split the difference, reduce the risk and go for the 712Pro, currently £191 (I'm tempted myself and anort here is doing nothing to put me off )
I wouldn't take too much notice of those graphs, yes they're a guide but they never tell the whole story.
Click to expand...

That translates to about $270 US which is almost exactly what I paid for mine. I wouldn't recommend them at the full $499 retail but that's more about build quality than sound. But at that price I 100% recommend them especially since you already have a dead neutral pair with the 560S.

Which by the way may be another consideration. They sit at $199 US.
Reactions: Gray

If I had gone for the K712 Pro, they would be my 6th AKGs. I fancy a change!
Reactions: anort3 and Gray
G

...They say a change is as good as a rest.
(Financially, we'd all be better off giving the rest option a go).
Reactions: nopiano

I don't blame you one bit for wanting a change. That's why I've owned as many headphones as I have!
Reactions: idc

If an AKG fan I'm in love with my Austrian Audio Hi-X55 (very detailed sound) and the open back Hi-X65 are out next month for $419USD.

Nothing but great things to say about them at that price point.

The Austrian Audio were tempting. I just need my AKG K271 Mkiis to pack in and I can start to look for another pair.