Clear out sales have started already it seems...

Oh cheesy peeps. I know they've been hit hard by the Woolies distribution arm going under. Didn't they stop internet orders as well? That must've stuffed them at this time of year...
A 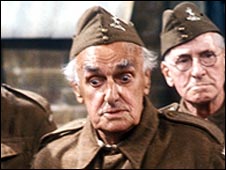 I might off to the Brunswick before I go home and offer them a couple of hundred for all their stock...
I

Andrew Everard:
ianandyr:It'll be like dominoes falling next year.

LOL. Watch out for the classic episode on Boxing Day on BBC2.ÿ

Robert? Is that you?
D

Yes HMV will survive. Its always busy. I have never been in an HMV thats not rammed. Zavvi was bound to fail. First it was our price, then v store, then Virgin, then Zavvi....and its always empty. Except for the megastores.
R

I wouldn't mind a visit chez Branson and read his walls.Bet they are full of next years prognostics.
L

Dont think Zavvi are anything to do with Richard Branson anymore.Management buyout sometime ago hence the rebranding.
R

laserman16:Dont think Zavvi are anything to do with Richard Branson anymore.Management buyout sometime ago hence the rebranding.

Yes it was sold to a management buyout September 2007..Thats what I mean by Branson reading the writing on his walls and disposing of it.
L

Ravey Gravey Davy:
laserman16:Dont think Zavvi are anything to do with Richard Branson anymore.Management buyout sometime ago hence the rebranding.

Yes it was sold to a management buyout September 2007..Thats what I mean by Branson reading the writing on his walls and disposing of it.

I can already see Andrew taking the mick out of what I will say now...

I've been lucky enough to go to Branson's house in Kidlington (because we went to one of his "Virgin Parties" (no jokes, please!)) and he actually does have one of those huge cork boards in his kitchen with his plans for the next week or so...
A

Daddy says when a bell rings, it's not an angel getting its wings, but the distant clang of another name being dropped...
A

Daddy says when a bell rings, it's not an angel getting its wings, but the distant clang of another name being dropped...

Don't diss a quality film...
A

The film was emphatically not being 'dissed'. As I posted in another thread yesterday, it's absolutely my favourite must-watch Christmas movie.

I think the high street carnage is being over played. Woolworths and MFI going into administration have got nothing to do with the current financial climate but are the result of years of poor management and just being rubbish basically. Zavvi going bang is a result of big changes in the way people buy their music and endemic of the fact that there only ever seems to be room for one large music chain in the UK - HMV. It has also been greatly exacerbated by the trading difficulties caused by the demise of Woolworths whose Entertainment UK arm was Zavvi's supplier.

Yes, there will be more changes over the next few months and some companies will more than likely fall into administration, but those with decent business potential are likely to be bought and restructured so that they can be developed into profitable businesses again. All it requires is some level headed management, adaptability, and control of costs, combined with well presented stores selling things that people actually want to buy with good customer service and at reasonable prices. Sounds like a lot, but it really isn't, and those companies that can adapt to the quickly changing landscape of retail will flourish I am sure.

What makes me sad is the number of people who have lost their jobs recently and who are facing a touch time gaining new employment.

We had large branches of HMV and Virgin/Zavvi opposite each each.

I cannot remember a time when I ever went to Virgin/Zavvi first. I only ever went there if HMV did not have what I wanted as a last ditch/fallback option before going home and buying on amazon.

Despite using Amazon a lot, I still buy many DVDs and CDs from HMV because I enjoy browsing in an actual shop. I would often come across stuff I did not know I wanted. (This is the the big difference from amazon where I tend only to buy stuff I know beforehand that I want.)

Same goes for books. I buy a lot from amazon but I also buy regularly from our Waterstones because physically browsing (as opposed to the online variety) has found me many interesting titles that I would never have known about otherwise.